A team of archeaologists has been excavating a burial site since 2013 near Saintes in Southern France. Between September and November 2014, they unearthed a necropolis with hundreds of Gallo-Roman graves. A couple of months ago, the archaeologists discovered skeletons showing evidence of shackling.

Almost all of the excavated burials yielded no grave goods expect for the grave of a young child in which vases dated to the second half of the 2nd century were deposited. This burial, also contained two coins, placed on the eyes of the child. The funerary practice for this grave is very different from those observed from the other burials identified at this site.

Even more interesting is that four adults had shackles on their right ankle, while the fourth also had a collar around the neck. A child also had a more rudimentary riveted object around his left wrist.

Wearing a collar around the neck, like a iron, bronze or golden torc, is common in Europe. It is distributed in time and space starting from the bronze age. Finding show that the torcs were particularly common among the Celtic tribes, but it was also widely known among the Germanic tribes as the geographical spread of the findings suggests.

A Celtic coin hoard discovered in Jersey, announced in December 2014, has been astounding archaeologists with a series of gold treasure finds. The treasure contained two solid gold torcs – one gold-plated and one of an unknown alloy – along with a silver brooch and a crushed sheet gold tube. One end of a solid gold torc was uncovered. The torc has a massive decorative ‘terminal’, which is where it was probably locked closed around the owner’s neck. The terminal is formed from two solid gold wheels, each about 4cm across and 1cm wide. The find can be compared to various other finds throughout Europe.

One of the most famous statues wearing a collar around his neck, is the one of the dying Galatian. But is was not limited to Celtic tribes. It has been said for example that the tribe of the Chatti wore rings too. 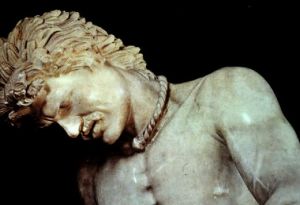 The dying Galatian with torc.

The collar is not something a slave in the classical sense wore or designated the status of an economical slave. On the contrary, the golden torcs which have been found, suggest that the were worn by a more wealthier class. However, the collar is not only a nice piece of jewelry. The wearing of the torc reveals a more mythological background. On the cauldron of Gundestrup we see probably Cernunnos with a neckring and holding a neckring. It seems as he is showing the ring to the viewer. It seems that he wants to show us that the ring is a part of a (initiation) ritual in which the ring-bearer plays a central role.

Antlered figure on the Gundestrup Cauldron

And on the horn of Gallehus we see (mythical) individuals with a similar torc around the neck. 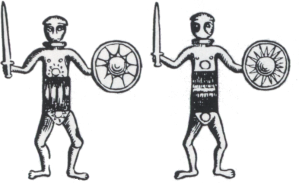 Figures on the Gallehus horn.

The custom to wear similar rings was also very well known in the Germanic world. In the Vǫlsungasaga we hear about how Sigmundr and Sinfjǫtli met two princes. They wore the golden rings because they were outcasts. Both of them had to wear the wolf-pelt in the woods. Klingenberg and Kaufmann proposed that the ring around the neck has the same meaning as the noose. It is a sign that the person who wears it, has been subjugated to the will of the gods – the chained person is a slave of the gods and lives in the woods only by the mercy of the gods.

The persons on the horn of Gallehus are mythical creatures, maybe subjugated men, maybe the gods themselves. The connection and submission to the gods is probably the reason why persons are buried with a torc around neck, hands and feet. Why the dying Galatian is exactly wearing the necklace, remains speculative. Maybe he had already been sentenced to death, maybe he was a member of the warrior-band, or he had subjected his life to the gods before falling in the hands of the Romans.

On the location of the Kudrun

The last month I’ve extensively been reading the Kudrun (Gudrunlied) over and over again. It’s an Middle High German epic, written probably in the early years of the 13th century. The song actually consists out of two major parts. The first part is about the wooing of Hilde by Hettel and the second part handles about the misfortune of their daughter Kudrun.

What excited me was that the story takes place in the delta of the Schelde. A map from the 14th century shows various places which belong to the Kudrun, like the Heidensee and Wulpen. On this island Hettel, Herwig and Siegfried fight against Hartmut, whose father Ludwig kills Hettel. One of the reasons that the Kudrun tickled my interest is the appearance of three heroes: Wate, Fruote and Horand. They are nobody else than Óðinn, Freyr and Hœnir.

The second map is from Mercator from the 17th century where the islands are better visible:

A document from Brugge, dating 1190, speaks of “Wulpingi, homines de Wulpia sive de Cassant”. Wulpa is related to the Wülpensand of the sage and reflects in the Oldnorse Frökasund where Freyki (the little Freyr) dies. Another document from 1167 talks about “Vulpa et Cadsant, tam de môrlant, quam de werplant”. Now Siegfried is called the one from “von Môrlant” (Moerkerke). It should be noted that in the southern part of Flanders there is even a region called “De Moeren”. Like the word says, it is a swampy area.

There are even more toponomical indicators that the main actions of the Kudrun takes place here and not in the high north, nor in northern Germany, although Denmark, Ireland, Normandy and the Rhein-area are also noteworthy places in the sage.

I would really recommend a read of the Kudrun in the original Middle High German to better grasp the atmosphere. Whomever speaks German or Dutch will have few problems to translate the text without constantly grabbing a dictionary.

When you like what you find here or if you just want to buy me a cup of coffee, just drop some coins on my account: